GTX0 is community-run. Do you have an issue or suggestion? add_comment Add one

Posted Over 1 Year ago by Pierce Almswell
Quote Edit

Physical Appearance: Pierce exemplifies the philosophy of working within one's means. A fairly athletic (if trim) body most often dressed in what best a clearance store could provide. The soft curls of dark auburn hair fighting against being tied back in a loose knot - reaching past the shoulders if liberated. Distinctive features are provided by green, upturned eyes, oft alight with the warmth of a welcoming nature or the hunger for inspiration. Another such mark of note might also be the small, dark mole down by the corner of his mouth.

(Another attempt at arting to sorta flesh this oc out!) 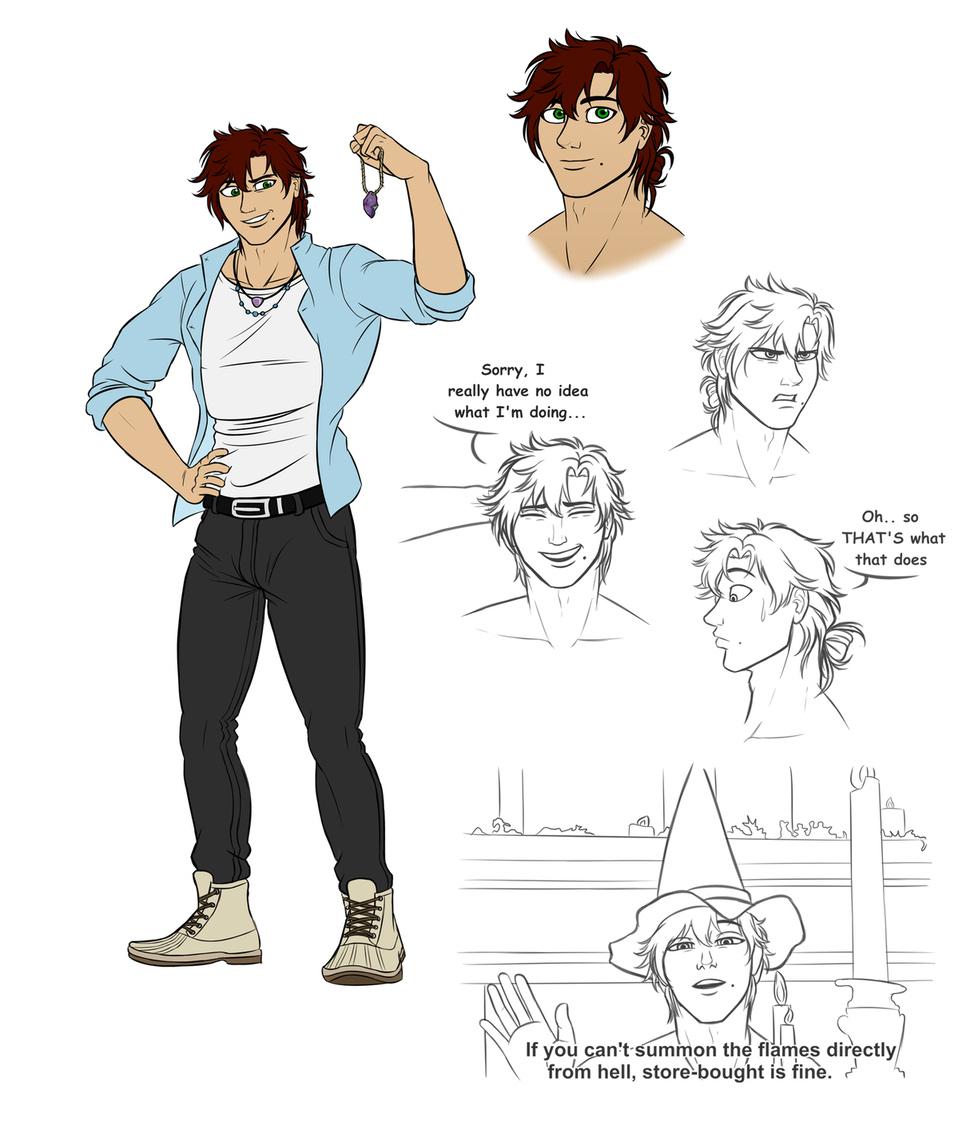 Personality: Most would know Pierce as a merchant of warmth, peddling out amicability to establish a caravan of comfort wherever he should be. Understandably, the young man prefers his waters sailed on the calm of friendliness to rancorous waves. Given his good-humored attitude, perceptiveness, and inclination towards lending a hand, he has much going for him to create such an atmosphere. Able to read the mood and respond to best fit the other's needs, it's easy to view Pierce as a big brother of sorts.

Yet despite this strong front of sociability, trust is a virtue that is hard-won with Pierce. This may stem from his "do it yourself" philosophy. A bit hypocritical, given how freely he'll assist others, yes, but all the same. Pierce is driven to pursue things himself. While the strive for success is admirable, this is too easily warped into a fault. He can become wreckless in his endeavors, and forget menial things like eating or sleeping or other such tasks requiring attention too devoted towards a singular pursuit. Thankfully, he's a quick study, so the foregoing of common sense doesn't typically drag out too long. The confidence built by such a quality is... a double-edged sword.

Powers: Though currently untapped, there is a whole array of abilities potentially at Pierce's disposal. Given that it's witchcraft, the whole of them can be encompassed by the description of "magic." Divination, wards, charms, curses, manipulation of the world both natural (i.e. pyromancy) and intangible (such as retrocognition) are some such feats that could be accomplished. However Pierce is still human, and that means a limited energy to expend. Preparing a ritual can greatly help abate burning through such fuel, along with time factors like the lunar cycle and the seasons that boost the strength of certain spells.

Furthermore, working such craft requires channeling these energies through oneself. This can heavily influence Pierce's own spirit and emotions. The obvious danger posed here is that performing dark magic (hexes, subjugation) would beckon dark emotions, which attributes to leaning towards more use of dark magic, causing a deadly cycle that could warp his being. Another double-edged blade in this armory lies in the general fact that the awakening of his gifts reveals itself to be a two-way street. That is to say, his discovery of the supernatural will lead the supernatural in turn to discover him. His mind, if untrained, is more open to psychic forces, and witch blood is truly a delicious and powerful ichor.

History: In the most original of origins, Pierce began with a knock on the door of a foster care institute. Not by him of course, as he was a baby left on the doorstep, snug in a carrier. Nary a clue as to who had left the infant there, the only solution was to integrate the child into the foster system. Little paperwork necessary and given the name Pierce Almswell. From there it started with one pair of foster parents happy to raise a baby. At least, until he grew to be a toddler. Tantrums were expected, but.. the couple never went into detail concerning it, just that when this child was upset it was "too much to handle."

A few years later and this time another loving couple acting as foster parents for the young Pierce. This time there was the bonus of two (biological) children, older than Pierce by one and two years. Things should have gone well, after all the parents had gone through the crash course of child rearing twice so had a nice handle on the newest addition to their family. Their own children were.. slow to warm up to Pierce, but this was natural. Nothing they couldn't handle. Something said before things get out of hand. It was another little feud. The oldest child was picking on Pierce upstairs. The parents, busy making dinner in the kitchen, were only alerted when voices raised loud enough for them to hear. Just as the mother was heading towards the staircase, her son met her down them first.. in a tumbling fashion. A childish dispute had given way to a woman's shriek, a child's wailing of how Pierce had pushed him down the stairs, drowning out Pierce's own frantic claims to the contrary.

Thankfully the boy had suffered only a broken arm, nothing a few months wouldn't heal. But the damage was done. A shame, the couple had even been considering adopting him, too.

Pierce was put back into the foster institution, this time placed among others proving too problematic to adopt. From then on there had been no reported issues, the boy growing enough to not have any further serious issues. He was given an education like any other, and actually got along well with many of the other kids. Still, he faced a challenge many others of his like did: what happened after. Once he was officially an adult, Pierce was sent out into the world. Unfortunately, the world welcomed him no more warmly than the quest for a family did. Sure, he had a keen, inquisitive mind, but also bore the heart of an artist, and this world had little love for artists. He found (un)steady work in his love for photography, and has devoted himself to making a true career out of that.

Another, more obvious concern for those without parents also plagued Pierce: who were his parents? Of course, this was a question he'd asked both others and himself in the past, but, now that he was a grown young man with barely even an apartment to call home, the riddle ate at him even more now. Pierce took the leap. He got his blood tested to find his ancestors, and then pulled every resource he could to work his way down the family tree. It was a surprisingly easy task, as he discovered that the Pembrookes were oft a notable family in society. However the relief of this knowledge came with a bite to it: there were no living relatives to confide in. Causes of deaths ranged from the typical heart attacks and strokes to the mysterious "went missing and was never found." His parents, his biological parents, were two such additions to that disturbing status.

However, he did find out where they had lived, and curiosity bade him to give the residence a visit. A mansion, of all things, rested in a ritzy upper neighborhood halfway across the state, old and befitting what had been such a well-to-do family. It was apparently left uninhabited for all these years, which served the sleuth nicely. Driven by the need to learn everything he could of this ominous family who'd abandoned him, Pierce sneaked in that night. There wasn't much to discover at first; any identifying items like pictures had long since been taken down, leaving only furniture and decorations to fill the hollow halls.

Just as Pierce was about to give up his investigation of the basement, something had caught his eye. It was an indent in the wall, almost in the shape of a hand. Pierce hadn't even thought about it, just placed his palm upon it, and suddenly a section of the wall was pushed in with such little force that he briefly pondered how this had not been opened by now. The thrill of a secret passageway (of all things!) drove him to venture through it.

What he found frankly disturbed him. A large room was presented before him, adorned in what had to be marks of the occult. Dusty gems and withered herbs littering shelves and glass containers. A large pentagram drawn on the floor with candles half-melted at each point of the star. This was what was to be found of his legacy? Possible devil worshippers? But what was most unsettling - no... intriguing, was a large book, clearly old and looking a little weathered but certainly not beyond use, on a stand near a wall. Peeling it open for the first time in what must have been a few decades revealed what seemed to be instructions for spells. Any other time and Pierce would have rolled his eyes, closed the book, and left the silly thing to be forgotten. And yet.. this was the only true relic of his line to be found. Surely he couldn't just leave it.

Against better judgement, Pierce, the last and forsaken of the Pembrooke lineage, took the grimoire and left behind both the mansion and its secret room. From there, the inquisitive young man would soon begin his research into his lone inheritance...


Notes: While I intend to draw some inspiration from Wiccan practices for how some spells can potentially work, I'm not about to call the whole thing Wicca simply because I know it wouldn't do the religion anywhere near justice in representation. Otherwise I hope this profile is fine! Again, let me know if there's any critiques or interest in rping that we could potentially work out!

I think I would wanna be Pierce's friend. He sounds like a great dude.

I'll try replying to your RP post tonight or tomorrow.

Thank you very much, Ceta! It's been a while, but it's really nice to hear that I'm not totally out of touch on whipping a character up (and that the art attempt isn't completely cringy LOL)

And no worries on replying, I'm just glad there's even an interest to carry out an RP at all!

Not at all dude! Your character makes me smile, and your art is awesome. I've never had the discipline to make art myself, so I'm always impressed when someone has your talent.

I'm really excited to RP, too. I've started working on my reply.