Did you buy any GameStonks?


Hedge funds have lost literal BILLIONS off of shorting GameStop, and random redditors have become millionaires. Personally, I've just been laughing. A LOT. This is the funniest shit that's happened in YEARS.

No, I literally started browsing /biz/ a couple of days ago, so no SEC investigation for me.

I did buy a double handful of silver, though. Biden's in, PMs are going back down, time to roll some funds into something solid. I'm planning to buy at least $1,400 worth of silver in the next couple of months.

What are they going to investigate? The plebs beating their betters at their own game? If this was illegal, you'd better believe that they'd be doing more than just crying to the media about how the "mean nazi incel trolls" are bullying them.

Hopefully, the fat cats will just eat the loss and this will get a lot more people interested in fucking them over. I've already seen the idea that "this is why we need better regulation" thrown around by a usual suspect, though. Because it's so fucking bad when it's not literally 100% guaranteed that rich people get indefinitely richer.

Yeah, I have no doubt that they'll try to bribe--sorry, I mean LOBBY congress to make sure that this never happens again. Just not sure how successful they'll be. 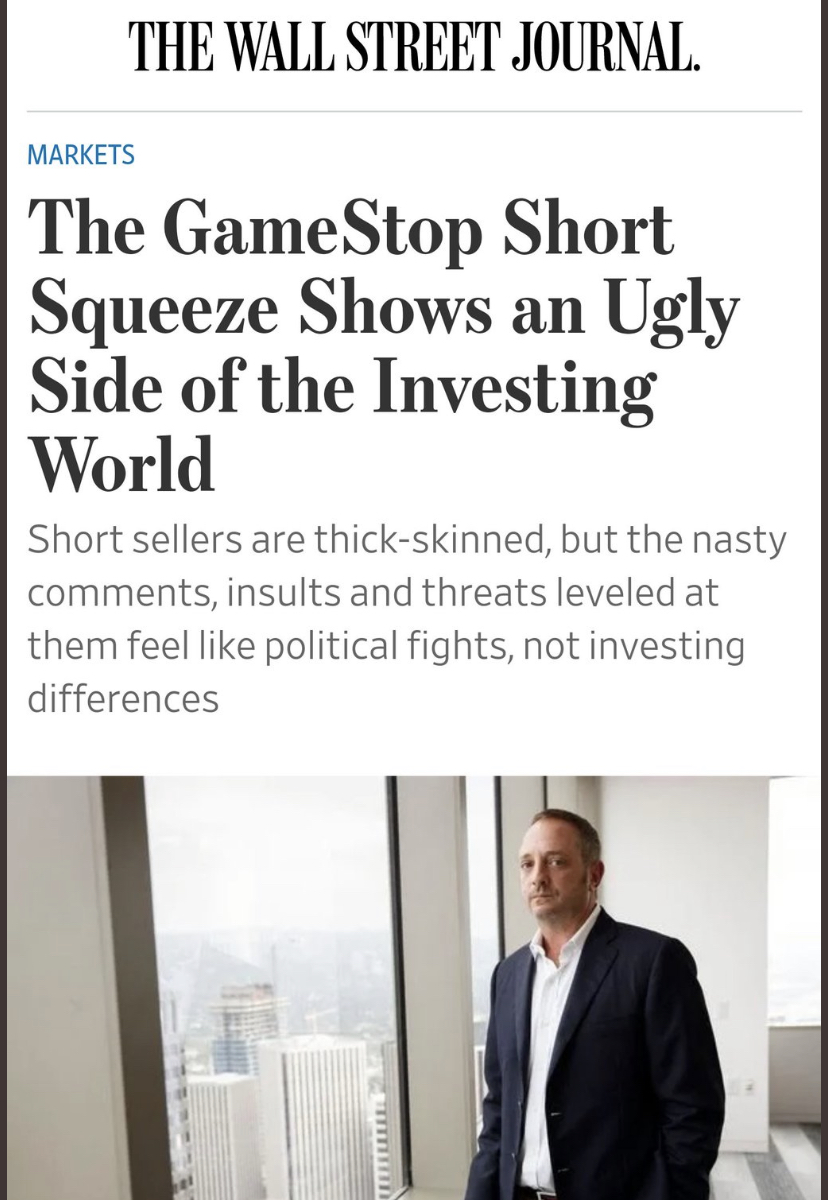 Looks like Robinhood and Cashapp have joined Ameritrade in disallowing the purchase of GME, AMC, and a few other short stocks. Webull might still be allowing it, though.

A coordinated, largely successful attempt by trading platforms to stop average Joes from buying gamestop stock and only allow them to sell their holdings? A-ok!

The game was rigged from the start, but this has been truly eye opening. I'm angry.

I haven't been following this closely because I've been trying to take a break from being "informed" but from what I gather, this seems to be yet another case of ordinary people breaking the illusion of power and those in power responding in an absurd heavy-handed way.

The game was rigged from the start, but this has been truly eye opening. I'm angry.

Those sons of bitches played us like a fucking fiddle.

Apparently Robinhood has decided that it would be a good idea to FORCE its users to sell $GME to short sellers. Needless to say, there's a class action lawsuit against them in the state of New York. They've probably saved more money than they'll lose on this case, though. Assuming that they don't beat it.

Elon Musk backs Bitcoin. Shits about to go insane. Trying to buy right now, but pretty much every platform is overwhelmed.

I really don't think this will do as much longterm as some people think it might. Other than getting a laugh out of beating fat cats at their own game. I don't really care for playing the game otherwise and I don't like stonks or stonk shit so na. But I get it, for some people this is more than just a laugh because they're either actually managing to get something out of it or they feel like they're taking power into their own hands for once when otherwise they're powerless. All I'll say is have fun while it lasts I suppose.

Hopefully, the fat cats will just eat the loss and this will get a lot more people interested in fucking them over. I've already seen the idea that "this is why we need better regulation" thrown around by a usual suspect, though.
Regulation if it is to exist should be against the fat cats not the other way around of course.

Just bought some BTC, but I also went in on PSLV and AG like I've been thinking about doing. Most people are distracted by GME, AMC and DOGE right now, but there are a few people anticipating a PM short squeeze in the near future. And if it doesn't happen, it's "only" some of the most stable physically-backed ETFs I can get.

What the fuck you trying to say Riven? It's a simple fucking question.

Looks like a disapproving reaction image. Was I wrong? Because I don't think I was. I was asking though, because by the way he was talking earlier presumably this is part of some anti-elite action on his part as well and not so much about the money. Thus I was asking why he'd presumably think it would go anywhere longterm.

It's a self-portrait of Claude Monet.

I barely even know who that is. How am I supposed to interpret that as a reaction to what I said?

There's been a lot of chatter all week about silver, which now has WSB backing. If true, good opportunity to both make money and stick it to the man (JP morgan).

Bitcoin is always worth investing in because it's designed to deflate. Buy and hold.

That's all well and good but good luck getting it to go anywhere longterm. I don't even have spare money to throw away on gambles like this especially when the inevitable government clamp down is only so far away.

@Riven: sorry for the original post though, I'm really high strung again for whatever reason. It keeps happening! It's happening!

What I'm going to get out of it is money and/or security. I might lose before I win, but I'm setting myself up to hold for as long as I need. I'm not gambling my future, I'm giving a better future a shot.

Fair enough, but you were right about the SEC investigations and it's probably more or less coming to an end with billionaires not being the only losers even financially it's also more regular people, and the billionaires seem likely to be bailed out anyway at some point from what I gathered now. And pump and dump shit happening yet again. Good luck to ya all with that.

Cool that things got this far but ya.

but I'm setting myself up to hold for as long as I need
Apparently that's how the pump and dumpers often get ya especially with cryptocurrency but I guess I don't know specifically for what you're doing.

I haven't bought GME, and BTC hasn't been pumped yet.

Either way, you only lose if an asset goes to zero (EXTREMELY unlikely with BTC) or you cash out. Buying in and then the asset losing a little value is not a real loss. Given that you shouldn't invest anything that you aren't willing to lose, holding the bag for a while shouldn't be a problem.

Honestly? It all kinda makes me understand why Jefferson hated capitalists.

This has been a revealing experience that has demonstrated to a lot of people how rigged and bullshit the system is. This is a perfect example of how big concerns can essentially make up ways to make money with ledger trickery, keep it legal with their influence and persecute anyone who goes toe to toe with them. Poor people are not allowed to win. It starts to become obvious how shitty this system is when the only reason that these big concerns can make the astronomical amount of money that they do is because the public doesn't know and isn't communicating with each other. The second that they are informed and connected, they fucking obliterate an entire hedge fund and cause an economic shitstorm that will have reverberations for years.

Melvin lost 53% in January because they got caught out once. Lol.

I don't just buy shit. I didn't buy DOGE at .07 like some of the smoothbrains on /biz/ did when it was getting hyped.
The fact that people keep falling for that is dumb ya. Dogecoin is well known for this kind of shit by now.

This has been a revealing experience that has demonstrated to a lot of people how rigged and bullshit the system is.
People keep saying that's happening with other people, but it's been obvious for so long now for so many different reasons as it is. A lot of people already knew the system was rigged anyway, if a shitload of other people needed this to make it clear that's... itself disappointing. Better later than never I suppose, but even in recent years there's been plenty of indicators in a lot of different ways that the entire system is fucked, even economically.

The second that they are informed and connected, they fucking obliterate an entire hedge fund and cause an economic shitstorm that will have reverberations for years.
For some rich people and organizations maybe but will it have a positive impact longterm for everyone else and will a lot of those people not simply be bailed out anyway? Will they not simply just be effectively replaced otherwise? They're not the only ones losing on this either.

If you mean in how people will react, perhaps this is just somehow the straw that broke the camel's back on top of many other things, but considering everything that happened in 2020 I'm kind of skeptical that this can be the long lasting deal breaking that leads to revolutionary tier action or will keep enough people investing forever, and if it does I have little doubt they'll be forced to stop if not jailed or fined for it at some point. We'll see I guess, I'm not opposed to any of this just skeptical of how much it may actually do in reality.

I'm not sure exactly what assumptions about the intent of the retail investors you're working under. It's precisely the fact that a hedge fund got BTFO by retail investors just investing in a stock and not rallying a fucking revolution that makes this interesting.

not rallying a fucking revolution that makes this interesting.
Maybe not them sure, but people are saying that's more or less the kind of thing all of this is going to lead to and why they say it's an extremely important step for some reason. I'm skeptical of people who think that, not necessarily everyone investing. As I said, hedge funders getting btfo is cool and amusing just I don't know why so many people think it's anything more than that.

Bought the dip. Let's see where it goes. WSB is losing their diamond hands (or at least some people that happen to post on WSB are, though they might be shills or normies). It looks like the probability is sliding back towards no squeeze, long hold. It's impossible for a new investor to tell, especially given that WSB just got absolutely flooded and their regular sub base is being drowned out.

Holding AMC at a loss right now. I should be able to break even or even make a small 20 bucks once theaters open up for good.

I am surprised that DOGE is up today. I believe Mr. Musk did some fuckery to get it up. If it drops to a low point I am down to throw a couple of hundred dollars at it. I am sure we will see it pumped up to reach a dollar in the near future.